First, and, most importantly – Happy Easter to everyone celebrating! I hope you’re all enjoying time with family and were graced with lovely weather and festivities like we were.

Look what the easter bunny brought me! He was super stealthy this year. My first trip to the kitchen, nothing was in sight. Coming back after getting my coffee cup from my room, however? Magic happened!

Oooh, never had this flavah-flav before!

Has my mom got me pegged, or what?! She pulled out all the stops this year – she gave me way too much! I was not expecting this whatsoever, but it’s safe to say that she’ll be enjoying many delicious meals in the upcoming weeks. With the gifting of Moosewoods and Bob’s Red Mill Cookbooks comes the expectation of good food, you know. We flipped through it together while waiting for my sister to wake up.

And, of course – pumpkin! some fun new bars to try, and some nut clusters I adore so much. And garbanzo beans. I love the random-ness. There were some goodies such as jelly beans and a Reese’s egg, too – but she’s began eating cleaner and cleaner, herself! 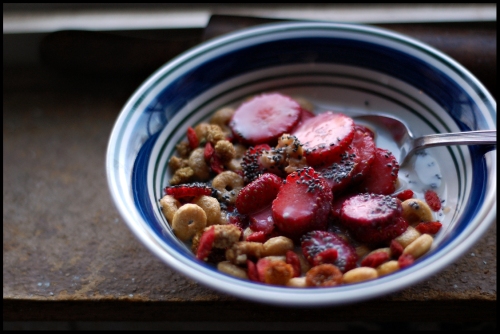 As well as had a morning snack to tide me over.

We traditionally have an Easter brunch, though it’s really more like breakfast, planned for around 9am, though we were really just waiting for my sister to get up! I thought I had slept in way later than I did (It’s amazing how long I can lay in bed for without the motivation of oats to lure me awake) but was surprised to see it was only 7:15 when I rolled into the kitchen! I felt like I had been laying awake for ever, and didn’t have any means of telling time, either. Oh well. I guess I just fail at sleeping in.

Anyways – I had a small bowl of Kashi H2H, strawberries, chia seeds, trail power, and almond milk since I wasn’t sure how long I’d have to wait. Not totally necessary looking back, since we ate shortly after, but oh well. I had some jelly beans, too 🙂

We ended up starting cooking the kielbasa around 8:15, though – hoping my sister would be up by 9. We also had pierogies and my mom’s delicious bread – that I don’t know the name of!

I’m not usually a huge pierogie fan – but my mom saw spinach and feta Mrs. T’s pierogies and immediately thought of me! And they were so. good. I still wasn’t sure I’d like them – but oh, yess. I sauteed them in olive oil, minced garlic, spinach, and sundried tomatoes and topped them with some garlic and herb feta, too! The most Italian-esque piergies you’ll ever find.  We also had broccoli and cheddar ones, but I didn’t have any.

We’re really picky about our kielbasa, and unfortunately, it’s really hard to get good, tried & true kielbasa around here. In a perfect world, we’d be able to get some from my mom’s hometown in Connecticut. But that didn’t happen this year, and nor was the grocery store carrying our preferred brand. So – we wound up with a Bilinski’s kielbasa and a Kayem kielbasa.

The Kayem kielbasa won, hands-down. It put Bilinski to shame, sad to say. I love the Bilinski chicken sausages, so I had high hopes, but it was incredibly tough and dry. Luckily, the Kayem was there to save the brunch!

Sooo good. I enjoyed a honkin’ big slice with some blackberry honey creme. It was delish. It was even made with half white whole wheat flour this year! Couldn’t even taste a difference.

My Bilinski’s kielbasa was rejected after the first bite and traded for ore Kayem, of course 🙂

I had a little bit of everything – minus the broc & cheddar pierogies. I was a little worried I would feel grossly overfull for the rest of the morning since I’m not used to such a heavy breakfast – but luckily I ate just until I was content and felt perfectly fine! It was a great morning. Low-key, low-stress, and happy people. We’re a very low-key family when it comes to celebrating holidays.

After chatting a bit, cleaning up, and digesting – my mom and I had to get out and enjoy the day! And what do you know – there was more raking to be done. I guess that’s all there is to do here? Oh, well. I like work like that when it’s in good company.

Around 11 we wrapped it up, and I snacked on an orange and some Sahale Snacks Valdosta Pecans. I was feeling fruit deprived! I also grabbed the Moosewood’s cookbook and while my mom and sister went for a ride, jotted down more recipes than I can count to try. Gasp. There are sooo many! I’ve been feeling rather uninspired lately, so this book couldn’t have come at a better time. Love it! Love the information included, their perspective & ideas, and of course – the recipes! 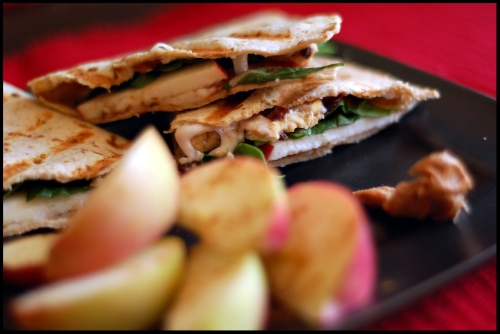 After their ride, we came in for a lunch. I was seriously contemplating between three things, and finally did this random quesedilla combination of them all, resulting in a wrap with some jam, tempeh, spinach, mozzarella, and sliced apple. Random. It kinda worked – but the plum jam I used was a bit overpowering. Don’t ask me why I used plum. That I do not know.

The rest of the afternoon pretty much involved more sunbathing, reading, and chatting. And that also called for a smoothie! I almost had my first ever green monster, but decided this would be easier. I didn’t feel in much of a foodie mood today! Well – until dinner 🙂

I had a coupon quite some time ago for this Yoplait smoothie pack which made it nearly free – so of course, why not bite?! I figured I’d just end up using the fruit in oats rather than a smoothie, but it was still fruit and still a good deal. But today I just wanted a smoothie and didn’t feel like making my own creation, so it certainly came in handy! And was pretty tasty, too.  I added some vanilla extract, flax, and used almond milk, and really found the vanilla to enhance it in a great way. So refreshing! The frozen yogurt chunks were a neat idea. 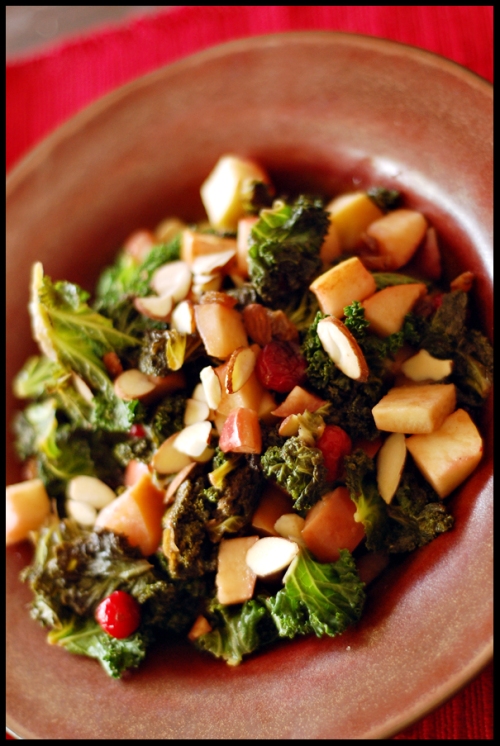 No one was really ready for dinner when the time came. Well, no one except for me! hah. Taking inspiration from Moosewood’s mention of stuffed baked sweet potatoes, I made leftovers exciting! 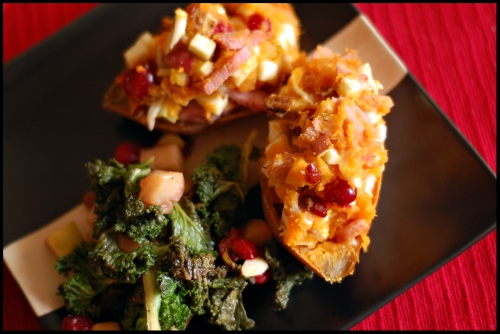 It was a “fend for yourself” leftovers dinner since the ham was cooked last night. Everyone else opted for a ham sandwich – but of course I had to make my own baked loaded sweet potato, and also sauteed up a bunch of kale, apple, and cranberries for everyone as a side. 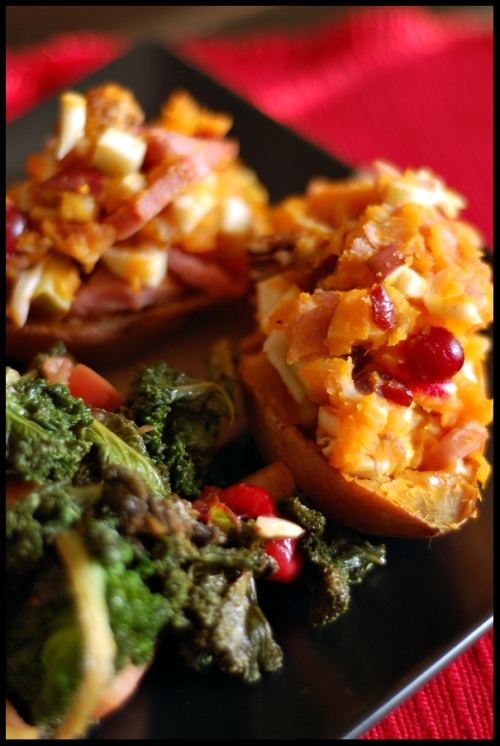 To make my sweet potato, I microwaved it first for 2 minutes before coating it in some olive oil and placing it in the oven until it was mushy. Then, scooped out the insides and mixed in a bowl with:

Mixed all up, stuffed back into the skins, and baked for a short while longer. Holy cow this was amazing. Lets just say, it was so good, I may or may not have made another immediately after eating to have as lunch tomorrow.

Obviously, Moosewoods didn’t have a recipe for a ham-stuffed sweet potato, but I just love that even just mention of something can lead you to come up with your own thang. This happens so often with me, although half the time my creation ends up being wildly unrelated. I am indeed excited to actually follow a bunch of their recipes. I do want to try each of the recipes they had for stuffed sweet taters. I might be on a kick, I’ll just start living off of loaded baked sweet taters. I wouldn’t complain 🙂

I’m loving this ham way more than I thought I would. Who’da thunk it?! And now – my belly is really happy, but I won’t lie and say that I don’t miss oats. Even a day without them is a day too many!

Anyways – as I said already, I hope everyone had a great Easter and has a great night 🙂