First thought – DKM. Dropkick Murphys. YES! That was it! go back to sleep.

Third thought – I think I’ll sleep in today. I’m a little tired and it looks crappy out so I probably won’t be going anywhere anyway. shut eyes.

Fourth thought – The phone would ring immediately after I declare I’m sleeping in, wouldn’t it?

So, basically I must have been driving myself crazy in my sleep because I still hadn’t thought of what DKM was before I went to bed. There were a couple bloggers who guessed it [e-mail me to redeem your prizes], which just made me laugh and remember waking up with “Shipping Up to Boston” in my head moments earlier.

And no, it’s not just because of the Bruins that I love that song. I mean, just listen to it. First thing in the morning, preferably. And do some Irish jigs around your butcher block in the kitchen while preparing your breakfast.

In a leprechaun hat, preferably.

Not that I would know anything about any of that scenario.

I would know something about flaxy French toast, though. So I’ll talk about that, instead. I’ll leave it to your own imaginations as to whether I was tap dancing around my kitchen while making this, though.

Being that I looked out my window and saw this yet again: 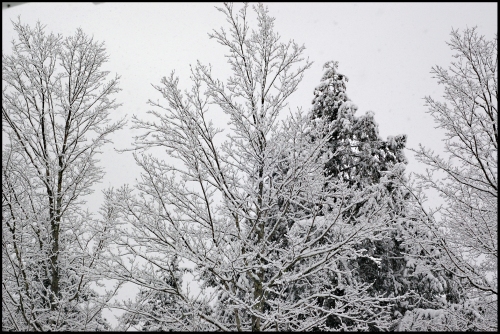 I decided to make something a little more time consuming for breakfast. I have pancakes down to a science so I can make them quickly in the morning, which carries over to mornings when I have more time, too. Having nowhere to go, I decided to put a little more thought into breakfast this morning.

I’ve been wanting to make French toast for a while now, but wasn’t sure if the mini slices would be enough for keeping me full. Today, I knew I’d be home all day. Worse comes to worse, I eat an hour later, right?! Surprisingly enough, it was difficult for me to finish it all! Don’t worry, though – I took one for the team and did.

Yes, it really is possible to get that same French toast texture without eggs! Making it with flax sounds strange at first, I admit. I mean, I think I was legitimately grossed out when I first heard of it, so I don’t blame you if you are, too.

But I mean, really. Have I ever lied to you? -insert shifty-eyes here-

Buttering/Earth Balancing your pan is critical to making any sort of pancake or sandwich – and French toast is no exception. You don’t need a lot, but you can’t even compare the flavor to that and just using non-stick spray. 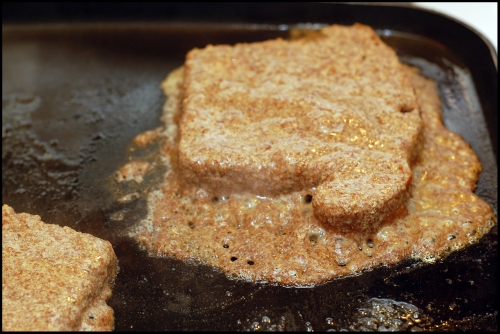 And please, no need to be “neat” about it. We’re not after pretty awards here, we all know the ugly food is the best.

Huh, maybe that’s why I’m always disappointed whenever I go out to eat…

If you’re patient and give it enough time – the outside still gets crispy while the insides are still moist and flavorful. I’m sorry if you hate the word moist. I do, too – but really, what else can I say? Damp? It’s not juicy not is it soggy.

The Mixture I used (approximately, anyways…about that measuring thing…)

Mix all with a fork, allowing to sit a few minutes. Add more milk if necessary. Poke each piece of bread a few times before dipping each slice in and saturating. Transfer to a greased pan, allowing extra of the flax mixture to remain on the bread. Cook about 4-5 minutes on each side, until crispy. 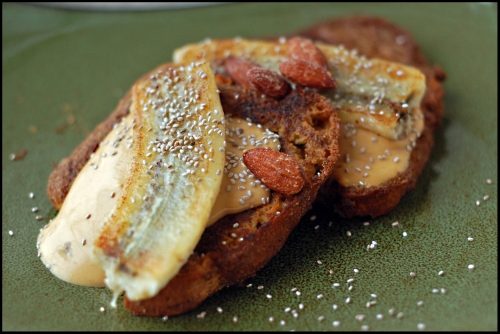 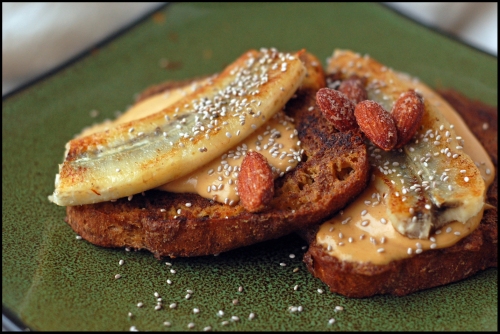 Note to self: I miss you terribly. (speaking of “bring me back” songs…)

Er, wait, what I meant was – note to self: make French toast more often. 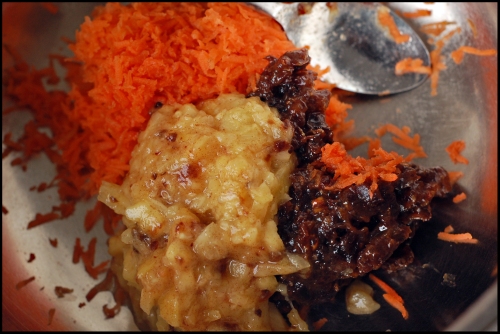 And about those bran muffins?

They were not just a groggy early-morning sentiment, my dears. They were happening.

I promise these were muffins for me, not Teddie. I kept thinking how much he would love them. Carrots, applesauce, molasses, cinnamon and sunflower seeds? The kid would be in heaven.

I used these almost-forgotten about pressed dates that Mo sent me way back when. I got a kick out of the “serving size: 1 package,” as I imagined myself just plopping down on the couch and nommin’ on the brick like so:

The recipe I used was Kelsey’s. And they are fantastic! It’s a good thing I didn’t actually read the recipe before I printed it off and trekked into my kitchen, though. It requires the use of a food processor, which is usually a big no-no for me. For some reason, I detest cleaning the processor in addition to regular baking dishes. Or in general. Same goes for garlic presses.

I realize this is probably old-news, but my new trick is using an ice-cream scoop. I used to just spoon it in, but then I’d have really ugly muffin tops. This leaves them nice and smooth! 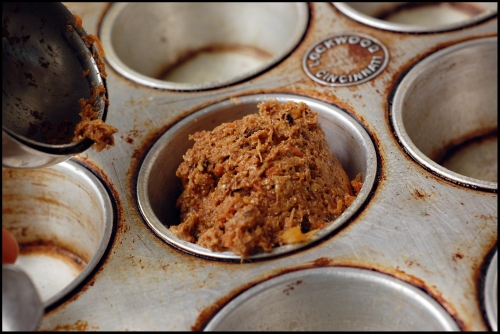 And perfectly sized! Well actually my mini-muffins are perfectly sized since I usually just want a little somethin’ somethin’ when it comes to muffins, but that would have required me refilling the tray about ten times. 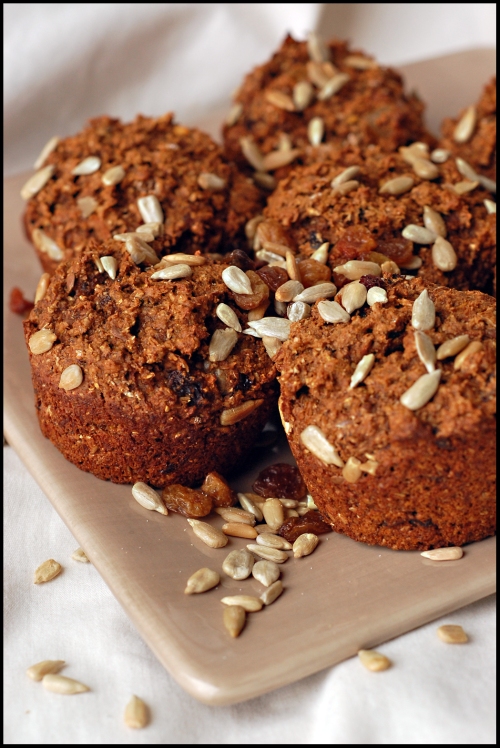 I am very picky about my bran muffins – a lot of bran muffin recipes use more oat bran than wheat, and are too sweet for my liking. I like my bran muffins to be dense, moist and…well…wheaty! These are just the ticket.

Another added bonus: they didn’t require any bananas. I love bananas, and have a great branana muffin recipe – but I’m down to my last banana and you guys know what happens when I lose my bananas. I think I might hide the last one, just as an extra precaution. You know…in case someone else might want it, heaven forbid. 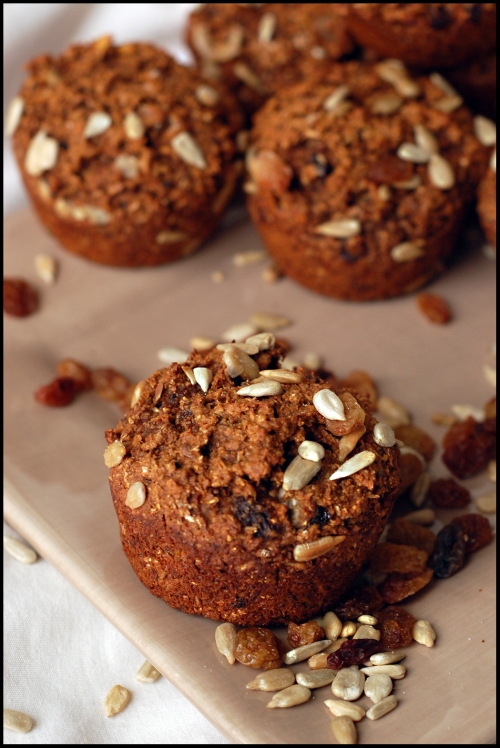 But if I haven’t convinced you to make bran muffins or flaxy French toast…maybe I can convince you to do this: 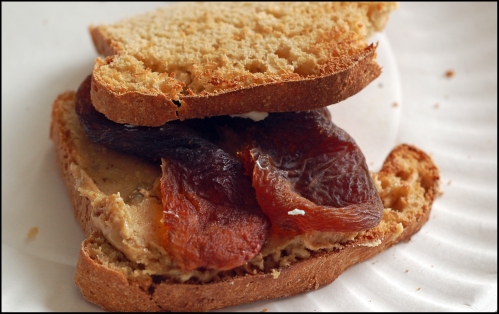 Toast up some good bread…smother one slice with cashew butter…smother the other with a bit o’ butter/earth balance…throw on some good dried apricots…drizzle a smidgen o’ maple syrup…and chow down. Heavenly.

(but what’s with me saying o’ instead of “of”? Am I really feeling that Irish today?)

And I’ll leave you with this scandalous picture:

I had sausages with dinner! I love sausages…

What’s something you openly admit to having high standards about? I am definitely a bread snob!