I am in metaphorical foodie heaven. 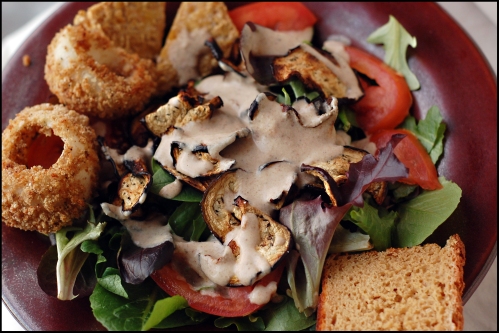 Also known as…a plate full of my soon-to-be obsessions. I think the only reasons none of this is already an obsession is because I didn’t know it existed up until now. Or last night, if we’re talking onion rings.

And a side of homemade bread. (we’ll get there.) Oh and a couple onion rings. I had a few leftover and am rationing them two at a time so I can savor them over and over. I only have two left.

I already am plotting more excuses to “need” to get groceries so I can purchase a lifetime supply of sweet onions. 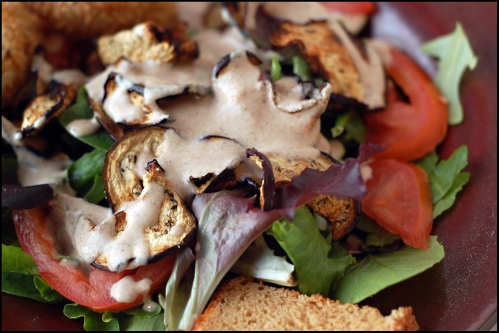 Fun fact: for just about the entire duration of my teen-hood, say from junior high to high school, you could bet $5 that whenever I’d/we’d go somewhere to eat, I’d be having a caesar salad or a caesar salad wrap. With chicken. Even after learning it had anchovies. And then something happened…maybe it was a caesar salad burnout. Maybe I was just too lazy to want to make my own once I started saving my pennies and stopped eating out for every meal.

But I finally geared up motivation to make a caesar salad (read: wasn’t feeling too lazy to clean the blender) and it. was. phenomenal. I don’t know how Isa thinks of these things, but seriously – this dressing is the caesar salads I remember.

And you’d better believe I was picky about my salads. You’re probably thinking I was healthy even back then anyways, but honestly, for some reason I just had an inexplicable attachment to chicken caesar salads.

And then there’s the eggplant bacon.

Oh hell yes it is.

I was basically munching on it for the entire hour leading up to dinner. I’m lucky I had any left for my salad. I was never a “bacon-on-my-caesar-salad” kinda gal, but apparently I am an “eggplant bacon on my vegan caesar salad” kinda gal.

And here’s the kicker: I can make all of the above but apparently remembering about the bread I put in the oven is too difficult for my brain to handle.

Not to mention my other rookie mistake of completely forgetting to spray the plastic wrap I put over top while it rose, so of course when I went to pull it off I disrupted the entire top of it, beautifully risen and all. 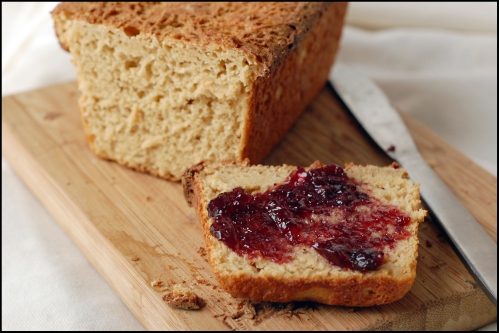 But ohhhhh hot damn, this bread? Best loaf I’ve ever tasted. Hands-down. And unfortunately for you guys, I can’t give you the recipe.

Ahem. I’m sorry. That was incredibly rude of me. But this recipe was so generously passed along to me from a wonderful blogger friend. I’d really love to tell you because these acts of generosity deserve mentioning – but I’m afraid my ugly loaf would be an embarrassment, so instead I will choose to hold off until I make a prettier one.

Which won’t be very far away.

See, I fell in love with L’s idea of making mini loaves, so I halved the recipe and just made a mini loaf. My “problem” was that I’d make a normal sized loaf of bread and feel like I had to live off of sandwiches for fear if I didn’t have at least one a day, the bread would get wasted. Mini loaf? No problem.

And as an aside – I need to publicly thank Jenn for being better support than WordPress is. She helped me figure out a way to publish the site I designed in iWeb for my photography! It’s got some kinks, but I feel so much more streamlined now 🙂 This blog’s gotta be next, though!

What’s something you accomplished today? It took all morning – but I was so glad to get my site up. Far from done, but done enough to be public, I think. And at least better than what it was! I also did a bunch of schoolwork. Grumble.

Do/Did you have a favorite “restaurant meal”? Something you love to order out, but never make at home? I never made caesar salad (of course, I didn’t make myself anything back then!) but as mentioned – always ordered it out!

[Side note: Ask me how happy I was to have natural, real light to photograph my dinner. Go ahead, ask me! I’m so sick of using flash!]