I’m really glad everyone enjoyed yesterday’s post!! I enjoyed writing it, too – I was actually a little surprised that I had to reel myself in a few times. Before moving onto a normal post, one thing Daniel pointed out that I should mention is that ketones actually occur when carbohydrate intake is less than 50-100g/day, not when protein intake is too high, which is what I had said. Another thing I forgot to point out is that yes – ketones are in our body naturally. The only difference is that if we’re eating a diet that is well balanced, everything in our body should be relatively well-balanced, too. So when there are carbohydrates consumed only in minor amounts, less fatty acids are being broken down and excess ketones build.

I was sure I was missing something 😉

But anyways. This weekend has been busy! Good busy, but still busy. Yesterday morning I had  a senior portrait to shoot bright and early…well, it was supposed to be bright and early. I ended up having to wait for the girl an extra half hour which was sort of frustrating, but I dealt.

I was probably so understanding because my breakfast was simply outstanding. It must have put me in a good mood 😉 Well that and I’m pretty easy-going, anyways 😛 I ended up taking so many pictures on this shoot – I am still going through them. I don’t do much usually, but she specified she wanted a “scene-vintage” type senior picture, so I’m doing some funky editing with color and such on some of them.

Since I was parked within walking distance of the co-op, there was no way I could just not go. I mean, hello! I was so stoked to see they had this coconut milk kefir! Ironically – I usually hate strawberry flavored stuff.

I was debating as to whether I wanted to try it for a good five minutes, literally standing there with a bottle of kefir in one hand, and this in the other.

I’d put one back, then change my mind.

I think the people there thought I was crazy.

So I was quite pleased with the taste. I had it over some of the best waffles I’ve ever made…mashed banana oat bran. It’s really good on its own, too.

That said, I really hope the co-op gets the plain or at least vanilla in stock…strawberry is good, but I doubt I’ll always want strawberry.

Especially with my ginger-kick! Speaking of which…

I ran completely out of ginger, but guilt-tripped my mom into getting me some while we were at the store 😛 She made me return a bunch of nasty cans and bottles for her.

As in, that she finds. It doesn’t sound too gross…but they’re not all rinsed out, the bag smells, and the beer slime gets all over your hands.

Though it is sort of comical as little old ladies watch as you feed the machine with gigantic empty 40s.

Anyways. Ginger kick. With my new ginger, I could now attempt gingerbread muffins. I guess attempt is an unfair adjective, though – I succeeded, after all!

Seeing as how it was basically impossible to find a recipe that did not require at least a cup of sugar, I decided to just wing it based on a banana bread recipe, because I also had some ripe bananas to use up. 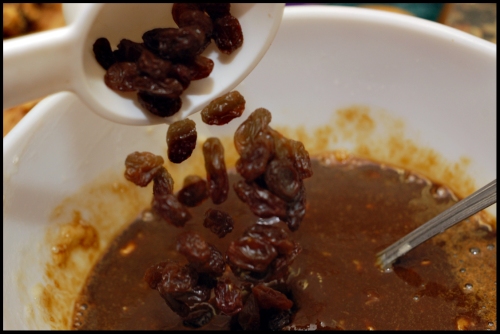 Combine the flour, oat bran, ginger, baking soda, salt, cinnamon, and clove in a large bowl. Set aside, and in a medium bowl, mash the banana with a fork. Stir in the molasses and almond milk.

Add the wet to the dry, and stir until just combined. Fold in the walnuts and raisins.

Spoon into sprayed muffin tins and bake for 30 minutes, or until a toothpick inserted in center comes out clean.

And if you want to play a trick on someone, tell them it’s chocolate!

Next time, though, I’d love to add fresh cranberries rather than dried raisins. ooooh! ahhhhh!

I also tried my first carnival squash this weekend! I was expecting it to taste a lot like an acorn squash, but it’s actually so much better. A lot sweeter than I was expecting (because, as I said, I was expecting acorny!) but purely delicious, especially with cheater baked beans.

I tried a different baking method, too – rather than baking face-down in a pie plate with water for an hour, I just put it on a cookie sheet and baked it face-up at 450* for…I don’t know how long.

I will definitely buy this guy again! It made for a great easy dinner last night, and easy lunch today – which is saying something, because you know I love me a good sandwich for lunch!

…like this. My mom broke out the “let it snow” placemats already. Uhhh, let’s not.

Anyways. This was a “grilled cheese,” the cheese being humnut cheese! It was just what I was craving.

It was, however, the last of my bread. I really enjoyed that loaf of honey whole wheat, but I wanted to try something new this time.

My initial plan was to make a bread that required I be of legal drinking age for the key ingredient, but we didn’t have any in the house, so I settled on spelt bread. I really love spelt – but you might not know that because I can’t remember the last time I bought a loaf/made a loaf.

Spelt is similar to wheat in appearance. However, spelt has a tougher husk than wheat, which may help protect the nutrients in spelt. Spelt flour has a somewhat nuttier and slightly sweeter flavor than whole wheat flour. Spelt contains more protein than wheat, and the protein in spelt is easier to digest.

It is that nuttier flavor that makes me really love it, I think!

Except…every time I’ve made spelt flour, I get a flat-top! I followed this recipe with some tweaks.
Next time, I’d just bake it for 35 minutes or so at 400* rather than 15 minutes at 480* first, and then 45 minutes at 380*. I think the high temperature first gave it a really crunchy crust. While the inside is still moist and flavorful, it’s really hard to cut through!

And hey..might as well wrap this up with a quasi-fail, right?!

I wanted to try making my own “KIND” bars – but my binding method needs tweaking 😛 The flavor is delicious – it’s a mix of cashews, dates, puffed millet, date molasses, flax and sunflower butter (well, primarily) – but I couldn’t get them out of the pan in one piece. I formed some of the “scraps” into balls!

This blurb is horsey, read or picture-read, just giving you a warning!

And I know, I know – it’s been ages since you’ve seen Teddie photos! My mom hasn’t come out with me recently, but she wanted to come see him this morning. I wasn’t even sure if I was going to go (since I haven’t been on Sundays) but then I realized I got all of my homework done yesterday and there was no way I was going to just sit and edit photos all day.

I’m so glad we went, though – it was a nice enough (by that I mean it’s getting too cold already!!) morning and since we got dumped with a tooon of rain the past two days, I knew we’d have to work in the indoor. I wasn’t sure how he’d be, so I was more willing to go knowing I’d have help available on the ground if necessary.

See, I took a lesson with A last week and we worked on going forward – meaning, hello, Teddie, yes leg means go! I’m fairly certain he knows this, just likes to try and get away with not doing it – namely, in the indoor. So the second he’d pull his “I’m going to stop” move, she’d be right there and quick little pop him in the butt with a lunge whip.

Before you go calling PETA, we weren’t beating him into submission, merely politely reinforcing the rules.

And he’s actually been really good since then! He’ll still randomly try it one or two times – usually if we’re crossing through the middle of the ring – but it’s not a huge issue. Knock on wood. We now have a nice, forward marching walk and trot. I was surprised at how much he’s stepping up in some of these pictures, actually!

I’m seeing our mini-dressage pony potential coming through again, which makes me happy 🙂 He’s such a stinker…love him!

And on a completely unrelated note…

But, since I’m one for cliffhangers lately, you’ll just have to wait and see what it is. I promise it’s pretty ridiculously yummy, though!

What was your highlight of the weekend?

Does anyone know of a good “nutrition tracker” or recipe-calculator website? I have to track three days of eating to analyze for nutrition for class…and while I’m really excited for the project, it’s also going to be a bit of work considering how much I make from scratch. I’m trying “SparkPeople” at the moment, but I’m not sure I trust all of the calculations since some of the foods are entered by users.