If you’ve got sandwich meat from WalMart don’t eat it!! you might die. roast beef and something. this is probably irrelevant since a lot of you probably don’t eat sandwich deli meat from Wally World anyways. But seriously – what’s up with all the food recalls lately?! I guess it’s not surprising, but still scary. Glad I’m careful about what makes it to my tummy.

Anyways. Today, I (and Teddie) had a revelation. 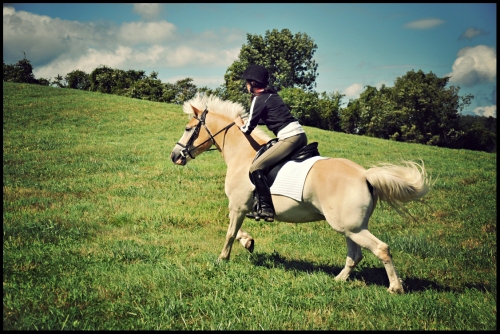 Teddie doesn’t wanna be a dressage horse. At least, not now. So, since I just want to do what makes both of us happy, we will be having play-days.

Play-days will consist of minimal suppling work, and mostly riding around aimlessly and carelessly in the big fields. 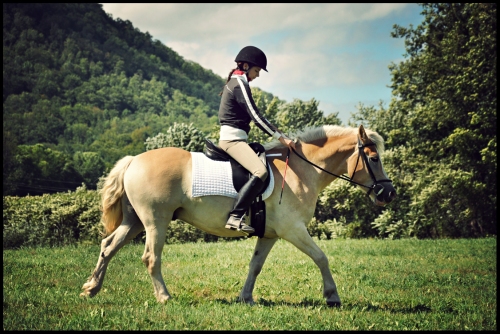 coming out of his grump.

I should have listened to him a week ago…and should have listened to my gut that was telling me to just give him a play-day today…but of course I wimped out because it was really windy and a bit chilly so I thought for sure he’d be feelin’ it. So we started in the indoor so I could get a feel for him, and all was well for ten minutes and then he pulled his “ehhhh, not so much I’ll just stop kthanks.” move. I’m not sure which is worse. A horse that bolts or gets really hot when it’s being stubborn, or one that just doesn’t move/gives mini bucks/shuffles sideways.

Not a very flattering picture of us - but I still love this. Note the birds 😉

So, I just went for plan A, what I should have done all along. oh, well. After today, I’m fairly certain his “game” is just boredom. He wants change. And reasonably so – indoors get boring. Of course, he always pulls his game when there’s more people around than there ever are. Two of my friends back from college came, and there were a bunch of kids helping A paint jumps, and of course it was while their parents were still there.

Anyway, long story short, that was while we were in the indoor. I walked him around a full length without stopping and just called it a day and went out to play! 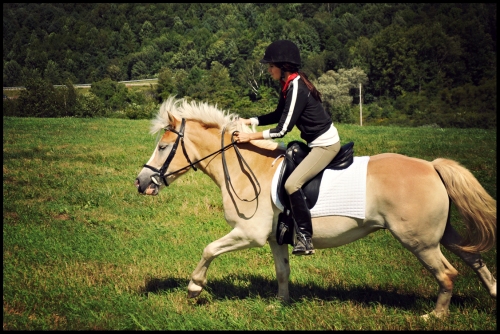 But you know what? That’s okay. I mean – I knew he wasn’t going to be some second level dressage horse. I wasn’t even thinking I wanted to show anyways. I wanted to do some dressage but mostly for fun.

And you know what? I think we both had more fun today than we have yet.

I mean – I think I’m smiling in every single picture. And Teddie is too! (well, except for that one grumpy one – and that wasn’t even a grumpy face, really.) I think he had a revelation that hey – this can be fun!

So, the lesson? The moral of the story?

I also lub this Organic Valley Vanilla Yogurt (still). It makes the best peanut butter icing! The PB I buy isn’t all drizzle – and gobs don’t really work for waffles or overnight oats. Solution? Nuke it for a few seconds and mix it with this stuff and some chia seeds, and you’ve got yourselves a winnah.

Revelation: I would definitely be okay with having this for breakfast every day. Maybe the toppings could change up a bit just for a little bit of zazz – but even figs every day would receive no complaint from yours truly.

for me: figs & pb, nut stuffed dates. for teddie (and me): a tydeman apple.

Yeah – packed this five seconds before I left, and of course I walk out the door without any of it. I remembered my camera though! 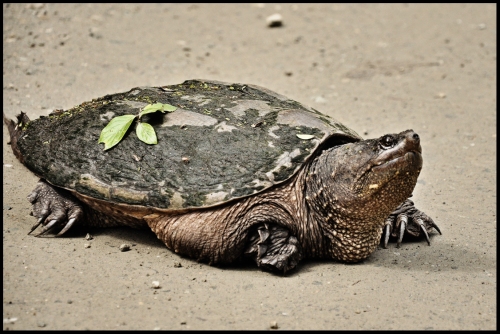 is this a snapping turtle?

I saw this big guy crossing the road when I drove home from the barn. I think it was a snapping turtle, though, so I definitely stayed a good distance away.

Those things scare the poo outta me. 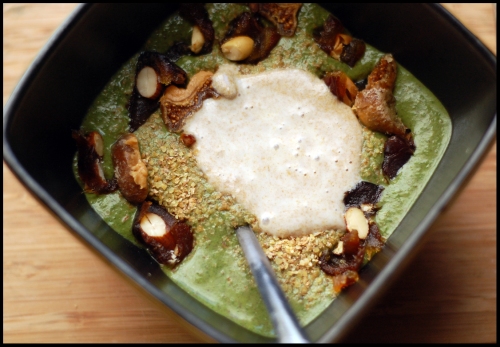 packed with tons of goodies!

topped with some of the dates i’d forgotten, wheat germ, and sunbutter icing (mixed with OV yogurt)

Revelation: life will still go on even if you have no bread for lunch.

But that doesn’t mean you should make another loaf! I tackled Daniel’s recipe for 100% WW Sandwich Bread. It popped out just in time for “dessert”!

Revelation: best. bread. yet. See – I’m so picky that most of the time…I don’t like a slice of fresh, hot bread. I like my bread toasted. And yet, I always still slice myself a piece hot out of the breadmaker. And I always think I’ve failed once again – until the next day, when I have some toasted for my sandwich.  This bread didn’t need toasting . ding, ding, ding – we have a winner!

I did make a few changes to the recipe:

-used almond milk rather than skim

-used olive oil rather than vegetable

-bread machine yeast, not active dry – though those may very well be the same thing. I have no idea.

Another revelation: my breadmaker is meant for loaves this size, not the size I’d been making! Which, I’d actually realized last time, but was afraid to make them bigger incase I didn’t like the recipe.

So! Go investigate the recipe. And make it.

Too bad I ruined this by making dork-face.

Revelation: Jiggy made me really appreciate Teddie when we were out on a leisurely trail ride and he randomly breaks into bronc-mode. He’s usually pretty laid back so I was just following my mom along, thinking about life, and he roaches his back and pounces in the air a couple times before I snap back to reality and growl at him. I think he knew he was being naughty and felt bad because that was all it took to make him stop, baha.

Revelation: I cannot get enough bulgur wheat lately! I think it’s made an appearance for the past…3 dinners? four? Anyways – tonight wasn’t much different from last night. Last leftover fritter (although friger/frigger seems to be preferred 😛 don’t say that to your five year old children, though)

For the bulgur, I simply prepared one serving in water and maybe 2 T. balsamic vinegar. Added in a diced tomato, garlic salt, fresh basil, and fresh oregano and let to boil. When it was done I stirred in smoked mozzarella cubes and it got all melty and deericious. The balsamic became sort of like a reduction with the heat 😀

And I am so sorry I haven’t but up the branana recipe yet. I was having too much fun going through photos from today 😛 Maybe later tonight. If not, definitely tomorrow!