Looks like there’s some procrastinators around here! I was concerned I was only going to get two entries until I woke up this morning – and a few trickled in overnight 🙂

submitted by Biz of Biggest Diabetic Loser, this recipe uses bulgar instead of ground beef!

Sent in by Mo, we have Spiced Pumpkin Bulgar. No link, as sadly she could not make it due to the pumpkin shortage -but this is the recipe:

Heat oil in a medium-sized pot. Add the onion, stir for a minute, then add the pumpkin, cinnamon, bay and curry powder. Cook until the onion is soft. Then add the bulgur and combine. Cook for a couple minutes, then add the broth, salt and pepper. Bring to a boil, cover, reduce heat to low, and cook 15 minutes until liquid is absorbed, stirring every 5 minutes to make sure the bulgur doesn’t stick to the pot. Season to taste, fluff with a fork and serve.

…from Janet, we have a Turkish Spicy Lentil and Bulgur Soup with Dried Mint and Red Pepper (Ezogelin Çorbası)

from Esra, a Bulgur Pilaf with Garden Fresh Tomatoes and Peppers 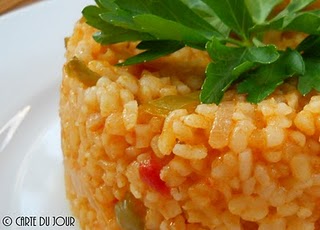 1/2 cup uncooked bulgar
1/2 cup uncooked lentils
3 cups water or vegetable broth
2 TBSP  flax meal
Put all of this in a pot, bring to a boil and then simmer for 20 minutes.  Then turn it off, stir in the flax and let is sit for 10 minutes covered.  While you are waiting…
2 cups pepper onion mix (frozen section)
8 oz mushrooms
Put all of this in a food processor and process until small, but still chunky.
2 tsp salt
2 tsp garlic powder
fresh ground pepper
1 TBSP spicy mustard
Add all of this and half of the hot bulgar lentil mixture to the food processor.  Process until the mixture comes together.  Still a little chunky.
1 1/2 cups oats
Next, add the oats and the processed mixture to the remaining bulgar lentil mixture in the pot.  Stir it all together and put in the fridge at least 3 hours or over night.
Next, line two sheet pans with parchment paper.  Preheat the oven to 350 degrees.
With wet hands scoop out a 1/2 cup of bulgar lentil mixture.  (Wet hands keep the mixture from sticking to your hands).  Line them up on the sheet pans.  Bake for 30 minutes then flip and bake the burgers 20 minutes on the other side
——————
and then came the hard part…deciding!
you all know how much i love bulgur – so i mean it when i say all of these recipes sound and look amazing! and everyone was so creative – another thing i adore. i love mixing funky, new flavors, and hearing of combinations i never thought of before! so, all that being said…i think i’ve gotta hand it tooooo…
Mo!
as often as i’ve “played” with bulgur and pumpkin – i’ve never thought to combine the two! this recipe was a combination of some great flavors, a sure winner. and i can’t wait to try everyone’s recipes!
So, where to next? Go visit Sarena for the next BSI competition! Can’t wait to see what she has up her sleeve.

8 responses to “BSI Re-Cap and Winner!”