Are we ready for today’s throwback thursday? Let’s compare and contrast, shall we?

But first off – I hope everyone had a wonderful Thursday?

Mine kicked off with a breakfast dilemma – how to use that last banana? Plain-jane nanner oats, or jazz it up? Well, I had one last whole carrot in my fridge, and who would I be if I didn’t make a stellar bowl of carrot-cake oats with it?

That’s what I thought. Just doin’ what needs to be done. Clearly, this needed to be done.

Although, if you ask me, chances are I’ll say that this always needs to be done. For this bowl, I sauteed some of the shredded carrot and nanner in almond milk and maple syrup. I love simmering/sauteeing the fruit in some almond milk as of later. I also enjoyed a drizzle of coconut butter. 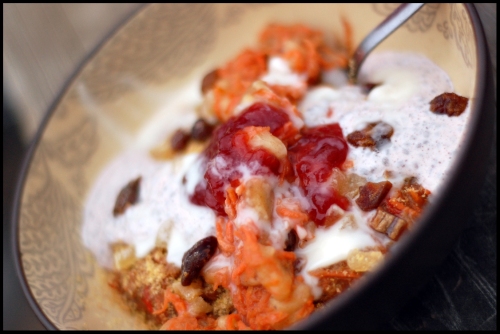 I goofed around for an hour (okay, more like two…what can I say? I told you I liked waking up earlier than necessary!) before heading off to class. But not before taking necessary hunger precautions.

Once again, just doing what needed to be done. This keeps involving finishing foods – this involved that last of my puffins. Insert sad-face here. And you all know what that looks like.

My first class dragged on like a bad dentist appointment. I really hate the dentists. No offense. Afterwards, however, I decided I was going to go on a photoshoot, so I texted up a partner in crime. Ironically, I decided to do this very same thing one month ago today. Unintentional throwback. Today I also decided I will be dropping my Intro to C.J. class. This sort of kills me because I have never dropped a class before. However, I did some career planning and at this point; it is a waste of my time. I know that sounds awful. But it is the truth, and it’s still at the point where it won’t harm my GPA.

Getting back to the subject at hand: after my first class, photoshoot, blah blah blah. 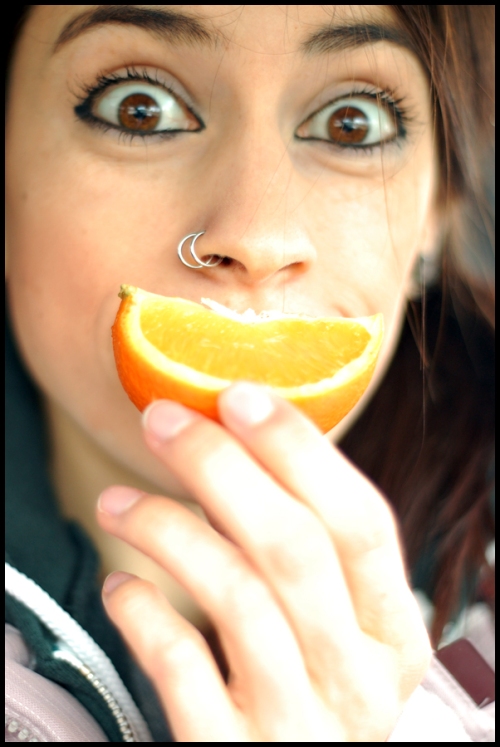 But not before enjoying an orange.

I’m not hatin’ on the rice crackers. In all honesty, I’m a little sad that they’re finally all gone. But I am moving onward and upward! My throwbacks continued as I listened to Mayday Parade in my car because for some strange reason, my radio wasn’t coming in to save its soul. This was the CD in the player. It brought back memories. I used to be a diehard Mayday fan. I won’t lie – this put me in a super happy mood. It’s probably a good thing, because the beautiful sun decided it was time to go away, and moody bleak skies invaded. Luckily for me, moody bleak skies make for beautifully diffused light.

PIC. Partner in Crime, not "picture." 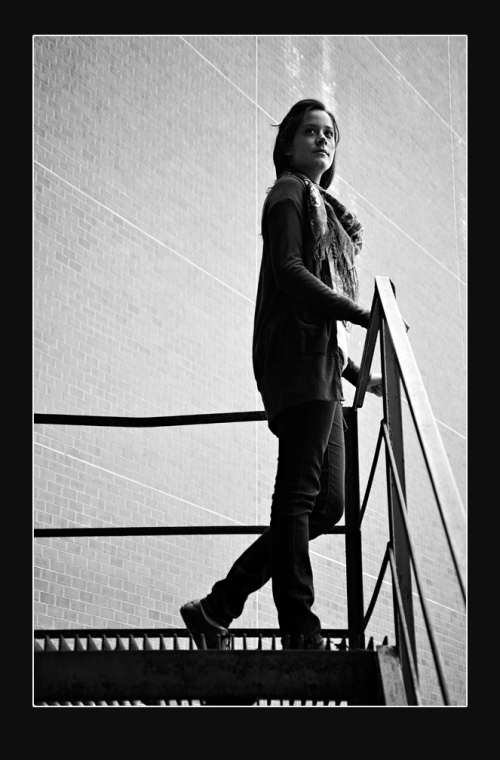 I interrupt this blog-post for a newsflash: The Lambert dude just got booted off American Idol, and while I’m not saying this is upsetting, wasn’t the last winner a Lambert? Adam Lambert? Right? It was bound to happen, if I am not mistaken. there can’t be two American Idol Lamberts.

But back to the normally scheduled blog-cast: After running around downtown for an hour or two, we seeked warmth and caffeien in the lovely Clem’s Cafe.

Note my honey packet, which I was ecstatic to find.

Gabbing and people watching took place, all the while being made to feel rather self conscious as we thought we were being stared at relentlessly. Apparently the basketball game of the century was on, and we took the prime seating. Everyone kept standing right next to our table to watch. Not basketball fans.

My cafe however, was superb. While it’s typically hard for me to support many coffees other than Green Mountain, I don’t mind some New England once in a while – and this is what Clem’s served. They have a new flavor. This new flavor is Irish Creme. This new flavor was fantastic. Throwback to this morning, where my flavor of the morning was Timothy’s Irish Creme. I guess I’m gearing up for Saint Patty’s Day. I am wearing a green hoodie, after all.

I am remarkably attractive.

People watching? There are some characters in this town. Well, that town. I live an hour from there, I think I’m safe.

I’ve mentioned this before, but I love cafes. They have such a relaxing atmosphere, and almost always have such beautiful light. I get geeky when I see good light. I’m that girl. The one who will suddenly say “StoP! Just look at this LIGHT!”

Anywho – eventually, we broke – I had editing photos on my mind, and the weather lent itself very well to such an activity. That, and – it was nearing two and I was becoming hungry. Clem’s had a great menu – I was definitely eyeing their spinach salad with homemade honey mustard vinaigrette – but I actually had a hempspread and jam sammie waiting for me in my car.

I love that Blueberry Cherry jam. Unfortunately, as you well can see – it is almost muerto. I think that’s how you said dead, anyway. Or – gonezo. 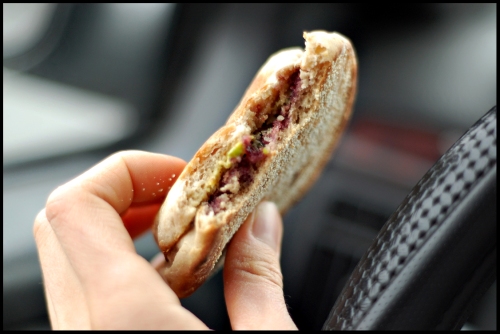 Not sure who bought these babies, but I decided I'd help myself. It's for my eyesight.

Yeah – Thirsy Thursday for me means drinking a lifewater. Maybe if I put it in a PBR can, I’d look like a normal college kid. Eh, it’s just not the way I roll, I suppose.

One month ago today? Funny to think about, because it was my first co-op experience! Who’d a thunk – now it seems like old hat! Though I did make the goji berries I got last a month. And it was then that I discovered my love for almond mozzarella.

After continuing to listen to Mayday Parade in efforts to make the sun come out all to no avail, and then puddle jumping my way into the house, I started uploading photos and fixed a snack 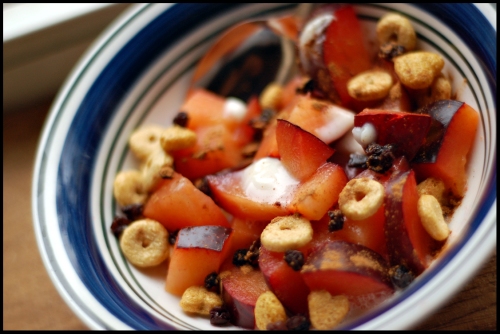 One of the best plums ever, coconut butter, dried currants, some Kashi, and some almondmilk. The Throwback? I used to be a Kashi H2H fiend. I actually purchased 2 bulk boxes of 2 bags each a while ago, that never got opened due to the fact that my obsession died soon after the big purchase. Luckily, my obsession is back. 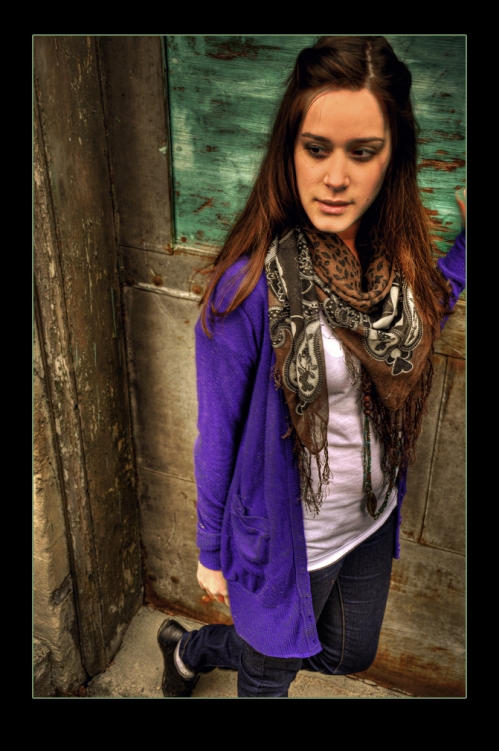 Editing took over my afternoon and evening, but I did break for a fun dinner. I mean, it’s been a while since I’ve had waffles, na’mean?

Essentially – my Multigrain Buckwheat Pancake recipe, made savory. Except, I halved the recipe, and forgot to halve the amount of eggs. Shnoopsies. Luckily, this didn’t have a terrible outcome and they still tasted divine. 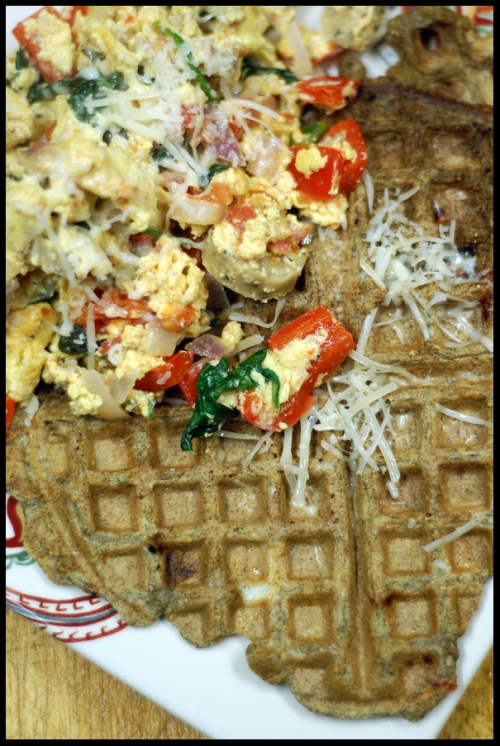 I realize my life could have been made esaier if I just made the dang things pancakes. But who doesn’t love waffles? I’ll make anything a waffle. Granted – I’ll also make anything a crepe. This threw me way back to when I would have ritualistic Pancake Sundays. I was big on Pancake Sundays. I also used to be big on egg scrambles. Oats are to me now, as egg scrambles were to me last summer.

Side-Note: has anyone else noticed that I’ve been eating my body weight in parmesan lately? Ah well. At least I don’t weigh tooooo much.

Oh yeah — the food. This was a buckwehat-spelt savory waffle – seasoned with garlic, mustard, pepper, salt, basil, sundried tomato, and had some parmesan thrown in there, too. The eggs were a glorious italian scramble with fresh basil, romas, red peppers & onion, and tomato-basil chicken sausage. And parmesan. Of course.

This was good. I am going to make everything a waffle from now on. I haven’t had a sweet potato lately – maybe tomorrow will feature a sweet potato waffle?

Do you have “flashbacks” or deja-vu-esque memories when you hear certain things, go certain places, or do certain things? I do all.the.time. Especially with music! Sometimes it drives me nuts – and sometimes it’s great.

Additionally – How are you guys feeling about my blog posts lately? I want some feedback on what you like and what you hate!! You can be anon if you’d like 🙂 Do I talk too much? Too many photos? I’m too weird? I eat too much cereal and broccoli? Hey – can’t guarantee I’ll stop that – but I dooo want your thoughts and opinions 🙂

Have a great night, everyone!