“Absolutely Fantastic.”
This is what a man on a BBQ ribs show just deemed his recipe, but it also fits my day, and that includes my eats for the day 🙂

This probably looks vaguely familiar. BUT! If you thought this was a repeat of some Blueberry-Lime Buckwheat Pancakes, then you would be incorrect. Instead, we have Lime Poppyseed English Muffin French Toast! I guess we should start airing a few of my breakfast obsessions:
1. Poppyseeds – Essentially, lemon or lime poppyseed flavored baked goods
2. bananas, blueberries, FRUIT!
3. greek yogurt.
4. really good jam or preserves
A month ago, this list would have consisted primarily of oat bran or oatmeal. I still love me some oat bran and oatmeal, but I have been shifting my tastes, I guess! This list will only get longer.

To make this lovely french toast breakfast yourself, simply combine ~1/4 c. egg beaters, 1 egg white, splash soy milk, vanilla extract, nutmeg, poppyseeds, zest of 1 lime, juice of 1/2 lime, and stevia or your sweetener of choice. Halve a whole-wheat english muffin, and poke each side with a fork (well, the “hard” side of each half). I’ve found it helps if you nuke it for a couple seconds first, too. Start pre-heating your pan, and then dip halves in egg mixture and allow to soak up some of the liquid. Throw on your pan and cook to your liking! Towards the last half of their cooking time, I threw in some frozen blueberries, and when they were all done I topped with some greek yogurt, strawberry preserves, some more poppyseeds, and the remaining lime zest. Loffly!
After happily beginning my day with a sure-fire brekkie, I got everything together for classes, which involved organizing all of my camera gear into one bag. This proved to be much more difficult than one would think, given the ridiculously large size of my camera bag. This also included lunch-packing: 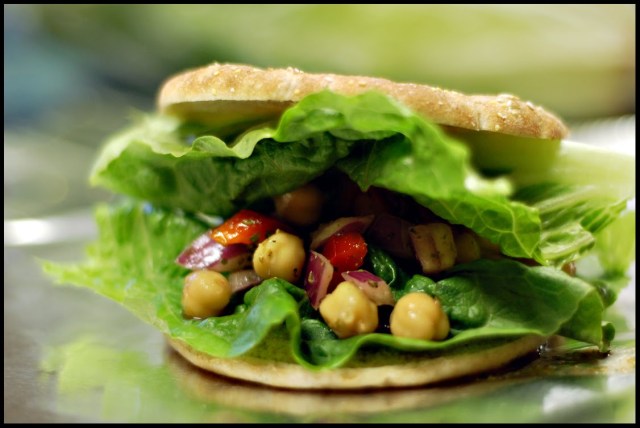 nom-nom-nom.
Drove to school in a beautiful wintry mix as the weatherman would say…and it was! Love it when it snows. It is so comforting! Morning classes flew by, and so I flew into Hannafords to pick up some goods! It’s the only convenient time for me to go there, really. They have a couple things that the local P.Chop doesn’t, so I figured it was a good way to kill the two hours I had before my next class…I needed more o’ deese:

Oh, yeah…enough veggie chips to get me by for oh, a couple days I Suppose. My mom asked me if I left any for the other Hannaford’s Nature’s Place hippies. Also got some more quorn chik’n tenders.
And check out these mustards!

Not sure how “right” it is for a Vermont chickie (a.k.a. me) to pick up Maine Maple, but how could I pass it up? Can’t wait to try them. I’m so lame.
Lunch Obsessions:
1. mustard. of all shapes flavors and forms.
2. Anything in a wrap. Anything that can be thrown in a wrap. La Tortilla Wraps. Sandwich Thins.
3. Panini Presses
4. beans.
5. hummus & veggie sandwiches.
to be continued…
Photo was fun today! We got to shoot a little in a lightbox. Pretty sure my teacher has a vendetta against me though because, for some strange reason, she dislikes the lab I work at?
Has anyone had a teacher where you get the impression that they are threatened by your knowledge of the subject? I still have so much to learn about photography, don’t get me wrong. But we’re starting with really basic stuff, so of course I answer, or ask more questions out of curiosity…and I always get these strange responses that are sort of “well…you’re right, but…” and some nonsensical answer that includes why it could be wrong. I don’t know.
Anyways. It apparently snowed like crazy for the two hours I was in there! There weren’t any windows so I was shocked to leave the building and see slippery sidewalks & roads, and mas fresh snow coating the ground. Love snow!
Came home and threw together fish tacos! 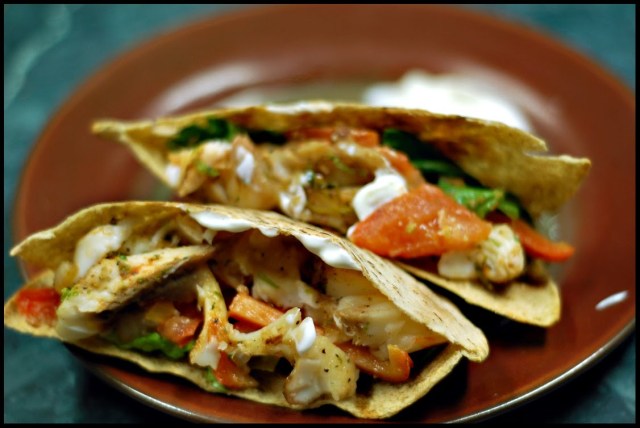 My first ever, no less. Granted, these are fish tacos in a pita. But shh. It’s pretty darn similar, no?
These were definitely holy-yum though! To make them I browned 1 tilapia filet seasoned with pepper, garlic salt, and chili powder in minced garlic, lime zest and juice, onion, cilantro, and chipotle salsa. In a separate pan, I threw together some julienned carrots, red pepper, chopped tomato, and salsa and seasoned with salt, pepper, chili powder, and lime juice. Added in some parmesan cheese and franks, and then stuffed a toasted Joseph’s Flax Pita with chopped romaine, the veggie mix, and the fish mix (which got treated with some Frank’s!). And a blob of greek yogurt “sour cream” on the side!

Soo nommer-ful. Love fish! Pretty sure I could be a vegetarian if I didn’t love fish so much. I could care less whether I ate real meat again, but I love fish.
Dinner Obsessions:
1. mustard. still.
2. veggies of all shapes flavors and forms.
3. wraps. still. beans. still.
4. tilapia. salmon. crab. shrimp. FISH.
5. Quorn Chik’n
6. Polenta.
to be continued…
So, that’s about it! I’m off to enjoy some dessert 🙂 But, I want to know…what are some of your food obsessions?!